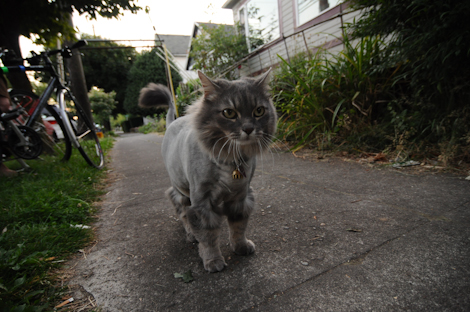 As this blog is supposed to be a sort of work diary I'd like to get in the habit of doing a weekly review of what went well, what didn't, and what I learned. This will be the first post in a weekly series lovingly entitled "Weekly Round-Up" until I find something less likely to make me vomit. As a consolation prize for the shitty title, I offer you a photograph of a funny-looking cat.

I only produced one segment this week for Think Out Loud. Normally I'd be unhappy with this, but I'm back to 16 hours a week, so I don't have a lot of time to work with. I put together a 15 minute conversation with Rob Smith, the editor of the Portland Business Journal, for Wednesday. It's part of a new series we're doing at Think Out Loud. Smith joins us every few weeks to talk about what's going on in the local business world. That one was pretty easy to produce. Smith is a great talker and brings lots of ideas to the table.

The other thing I invested time in this week was a presentation about how we can improve our use of Twitter as a show. The gist of it was that I believed that our tweets had become too formulaic and that we should be taking chances and having fun with the medium. For added effect I did the presentation in the form of a bunch of mock tweets. Here's one of them.

The presentation was well-received. We resolved as a team to tweet more often and to try new things. Dave, the host, live-tweeted a 24-hour monologue that Mike Daisey was performing at TBA. It was an awesome beginning to the new Think Out Loud Twitter feed.

I received some encouraging news this past week. We do a web traffic review every six months. When presenting the results, Sarah, our executive producer, said that the two shows that drove the most traffic to our website had one thing in common: they were both produced by me. One was the segment I put together on bicycling and race, and the other was about the brighter sides of failure. I felt pretty good about that.

One more piece of news from the week. Our newest producer started today. His name is Dave Blanchard and I can already tell that he's going to be a real asset to the team.