Zine: How to Make It in Radio 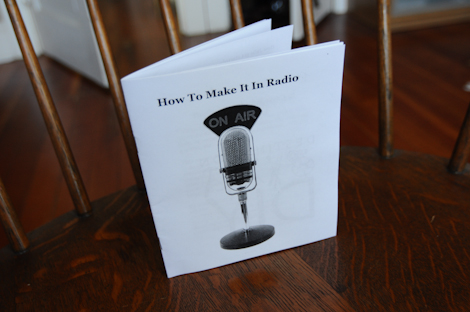 I just came across a new zine by Julie Sabatier which tries to answer a simple (and extremely complex) question: how does one make a career in radio? Ever since I started working in radio, I've constantly wondered if I'm on the right track. Starting out as an intern seems pretty common, but was I doing the right internship? Should I have been pursuing print journalism jobs more aggressively? Should I be applying to journalism schools? The questions are never-ending.

Never-ending, that is, until you ask someone who's been through it before. That's the idea behind the zine, entitled How to Make It in Radio. It's essentially a set of interviews with radio producers and reporters about the path they took to get where they are today. 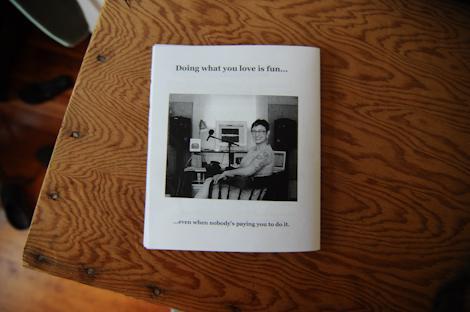 Julie interviewed Sarah Gustavus, Emily Friedman, April Baer, Nate Tabak, and Karen Brown. Common themes include stumbling into radio rather than actively pursuing it. Karen figured she'd end up in print, April in television. Sarah says that she never considered it as a potential career until she visited a station in South Africa. That's not everyone, though. Nate says that he fell in love with the "invisible, comforting voice" of radio at a young age and wanted to "be that voice." And Emily interned at Michigan Radio during her senior year of college.

Having stumbled into radio, I belong in the first camp. I'd enjoyed listening to the radio but never considered producing until a writing teacher recommended I apply for an internship at OPB.

The zine also includes a helpful glossary, resources, a definition of what it means to be a producer, a few notes about podcasting, and an advice section featuring the same people included in the interviews about how people got started. As you'd expect, there's lots of variations on the theme of "get your feet wet." I suppose I'm on the right track in that regard.

How to Make It in Radio was put together by Julie Sabatier, who I work with on Think Out Loud and Destination DIY.