How to Make Radio 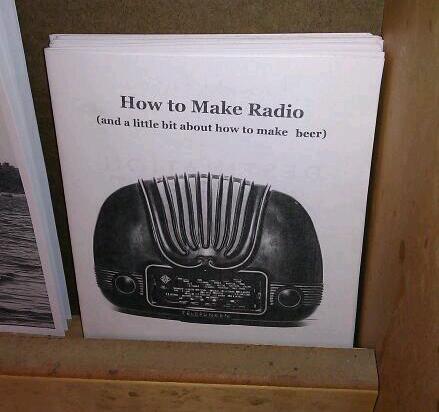 If someone who had never tried beer before told you that they’d found the best one ever, you’d be right to be a little skeptical. Well, that’s me, except that instead of beer I just read my first zine, and I’m pretty sure it’s the best one in the world.

It’s called How to Make Radio and it’s by Julie Sabatier. It’s about twenty-four pages long and covers everything that someone starting out in radio (like me) would need to know. Julie explains how to record good sound, recommends some good equipment (recorders, headphones, microphones, and software), and includes a radio script and good interview questions to ask. It doesn’t sound like a lot, but for someone like me it’s invaluable. Not only because it answers a lot of questions that have been floating around in my head since I started at Oregon Public Broadcasting in September, but because it says someone has done this before, you can do it too.

It costs two bucks. You can buy it at Powell’s and at Julie’s website, linked above.